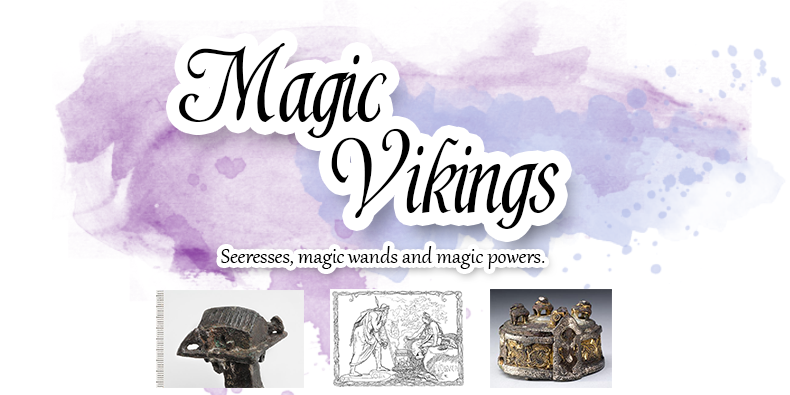 Magic wands, seeresses and Vikings. It is a subject as wide as it is fascinating that I will write about here in broad terms. It’s a little long, so hang on but don’t be afraid: this article is not bewitched.

Vikings who do magic, what does that mean?

You can imagine that the practice of magic among the Vikings is a tad bit different as among J.K. Rowling’s books. Among the ancient Scandinavians, the word “seiðr” is used: it is a name that is found in later Icelandic sources (since the Scandinavians of the Viking Age had an oral culture, there are not a lot of writing from them directly), such as the poetic Edda or the sagas, in travel stories, but also on runestones. All these sources permit to deduce that the seiðr would then be a kind of active magic allowing its practitioners to see the future, cure diseases, change the weather, reveal secrets, switch to animal form, or enter a trance in order to visit other worlds. There is also a darker aspect of the seiðr intending to inflict mental or physical injuries (it’s a little bit like what we call “dark magic”).

Concerning the textual sources, there is a travel account by Ibn Fadlan1. Without indicating the name of seiðr or any other name however, he offers a description of a funeral ritual for a Rùs’ chief (the Rùs’ are the descendants of the Swedish “Vikings” who left for the East, close to Russia… Basically. They deserve an article on their own) from the early 10th century with great similarities to what is later found in Icelandic medieval texts: it describes the ten-day ceremony prepared by the family, including a woman called “Angel of Death” who takes care of putting everything in place in the funeral boat, around the deceased (and it’s not super glamorous so if you are sensitive, I advise you to take a break now from your reading). It is also this same woman who puts to death the young slave who will accompany her on her journey towards death, after a ritual during which the slave is carried through a wooden structure that Ibn Fadlan compares to a door frame and proceeds to various actions (she cuts off the head of a hen, or even gives her bracelets to the angel of death, while evoking the vision of her relatives already in the Kingdom of the Dead, including the present head, mentioning that he is summoning her to join him). The men then carry the slave on the funeral boat, give her alcohol to drink. Later, she was forced to enter the ship, while the men struck their shields with wooden sticks to mask her cries, so that the slaves would not be afraid and refuse to sacrifice themselves with their masters when their turn will come. Six men then sleep with her, then the woman called “Angel of Death” ties a rope around the slave’s neck and asks two men to pull each other while she plants a dagger between the slave’s ribs, in different places, until she dies, and then they place her next to her master. Then, one of the decease’s close relatives approached and seized a piece of wood and set it on fire. He then walks backwards towards the funeral boat, completely naked, holding the burning piece of wood in one hand and the other hand placed on his anus (yes) (some suppose it must be to protect himself from a possible infiltration by the spirits of the deceased but well, it could be anything eh). He then lights the wooden pile under the boat with the piece of wood. Then the others also approach with burning sticks and add them to the pyre. And then everything burns.

Sensitive people, you can read again from here.

I have written down here the full ritual so you’re not frustrated, but the most interesting element in this story is of course the “angel of death” woman who can possibly be associated with those called Völur (singular: völva) and who were generally in the centre of the rituals. The slave can also be perceived as having certain powers attributed to the Völur (the vision of the world of the deceased).
There is a wide choice of vocabulary; the different names are gendered, and even if archaeologically we find mostly women linked to magical ritual objects, in textual sources, we also find names and stories linked to male practitioners.

In short, the völur practiced the seiðr with the help of a stick and songs, seated on a seat dedicated to this function. The songs allowed them to enter into a trance and thus visit the spirits and gods. They can predict the future and answer some questions that the participants of the ceremony ask them about their respective destinies. The völva practices both for herself and for others, alone or with assistants. The practice of seiðr is similar to shamanism, and it is not uncommon to find its practitioners under the name of “Nordic shaman”.

Magic in sagas and other medieval texts

The Icelandic medieval texts give us the best idea of the role of a völva or wizard in general. Although post-Viking Age, and thanks to stories like Ibn Fadlan’s seen earlier, we know that these are sources that can – at least – help in understanding the Viking world and mentality… And there are a lot of them. The clearest stories come from the Ynglingar Saga, or from the poetic Edda in which we find poems like the verse 22 of the Völuspa (“the prophecy of the völva”) with a description of a völva:

Heiðr they named her
who sought their home,
The wide-seeing witch, in magic wise;
Minds she bewitched that were moved by her magic,
To evil women a joy she was.

The god Odin also has abilities that are very similar to those of the völur. In many stories, he transforms himself into animal form, performs initiation rituals to acquire sacred knowledge, controls the elements, cures diseases and much more. The Ynglingar saga evokes it in particular:

Odin had the skill, that brings greatest power, and worked it himself. It is called Seiðr , and by means of it he could know the fate of men and foretell events that had not yet come to pass. He could work the death of men or loss of luck or sickness. So also could he take the wits and strength from some people and give it to others. But this magic, as it is worked, involves such great perversity that it is thought by manly men to be most shameful to practice it, and this art was taught to priestesses [gyðjur]

You will notice it is mentioned here that Seiðr was only taught to women. However, in other stories we find men practising magic, such as in the Saga of Harald Fairhair (Harald I of Norway):

Rognvald Rettilbeini had Hathaland. He learned magic [fjölkyngi] and made himself a sorcerer [seiðmadr]. King Haraldr thought badly of sorcerers [seiðmenn]. In Hordaland there was a sorcerer named Vitgeir. The king sent word to him and asked him to stop the sorcery [seið]. He answered saying:

It harms little that we use sorcery
We farmers’ children and old women.
Since Rognvald does, Rettilbeini,
high-born Haraldsson in Hathaland.

From these various texts, it can be seen that seiðr is a practice known among Scandinavians of the Viking Age and the medieval period. Similar magical practices are also found among other peoples, such as the Sami (living in northern Sweden and Finland), or in Siberia, Alaska, Canada and Greenland.

The objects considered as proofs of the practice of seiðr are considered as such thanks to the stories seen above. Artefacts considered as “ritual tools” are generally quite difficult to identify, and it’s the written sources that help us understanding certain objects such as “magic wands”.
Concerning those – which are the easiest objects to identify – several examples have been found in Sweden, including three found in Birka (the first town of Sweden), a larger one on the island of Öland and one on the island of Gotland. To date, few examples have been found in Denmark, but it’s in Norway that they are most commonly found: archaeologists count more than twenty. Among these wands, those that could have been dated all belong to the 10th century.

So how do Viking magic wands look like? Well, exactly how you think. Most of them are about 70cm long, and are made of metal (most often iron and bronze). They are usually decorated with dots and circles, and have something that looks like a handle at one end. Some are simpler: just a metal rod. The rod of the island of Öland is a little special, because its “handle” is topped by a small bronze house and animal heads.

Tombs of völur are generally tombs of very rich women, which shows the high importance they had in the Viking Age society. The tomb on the island of Öland, with the decorated rod, also contains a jug from Central Asia and a bronze cauldron from Western Europe. The deceased is dressed in bear fur and buried in a boat, accompanied by sacrificed animals and humans. The Norwegian tomb of Oseberg contains the remains of two women: one is a slave, and the other is of high status. Several objects in this tomb are characteristic of the practice of seiðr, such as a wooden wand or stick and cannabis seeds in a purse.
In the female tomb of Gotland, the völva is accompanied by her wand, some horses, a bronze Arabic chariot and jugs, a hollow brooch containing white lead (poison in its concentrated form), a small silver jewel probably representing the goddess Freyja, and a large necklace.

The Völur lost their status with the arrival of Christianity. The word “völva” was later attributed to witches, with a rather negative connotation since their magic got considered dangerous. Later in the Middle Ages, the practice of seiðr and other forms of magic was banned… This probably did not prevent some from practising it anyway. But as a result, there are far fewer traces of it.

Now is the end of this article, I hope that despite the length you still enjoyed it and that you learnt a few things! As usual, feel free to leave comments, whether they are positive or negative it helps me in any case! As stated previously, English is not my first language so it’s very likely there will be some mistakes and in this case, I’ll take your help gadly.
The sources are below, don’t hesitate to take a look at them to learn much more about the völur, it is a rather complicated subject and always popular within the research so updates are frequent…
See you soon for a next article and thank you for your growing interest 🙂

1 Ibn Fadlan is an Arabic traveller who met the Rùs in the beginning of the 10th century.

This site uses Akismet to reduce spam. Learn how your comment data is processed.