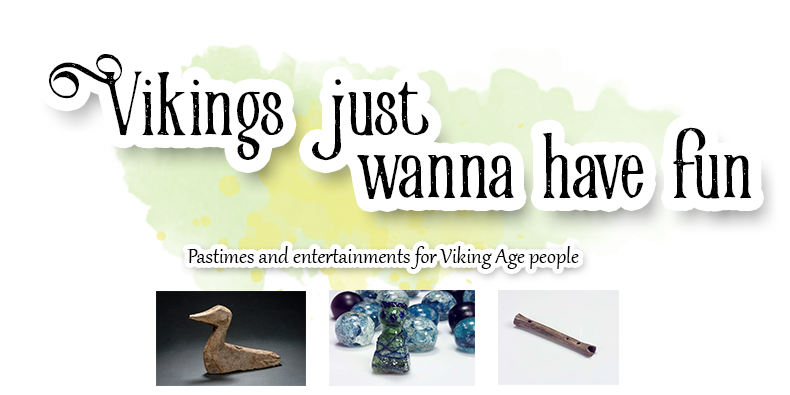 The ones we call Vikings are well known for their raids and explorations. What about the everyday life? How did Viking Age people enjoy their free time? Let’s go around and look at the idea of fun for our old Nordic friends.

We can’t find a lot of information about what Viking Age children did for fun in the written sources, and archaeology doesn’t show much neither… Except for toys.
Toys have been found in settlement sites as well as in the few children’s graves, and were made of wood, bark, bone or eventually metals (but those are rarer). The common ones are miniature animals, even tho some might have been used as weights or in a ritualistic way. A lot of wooden horses have been found (in Ireland, Norway, or the Faroe Islands for example), some of them having more carved details than the others. Wooden boat miniatures were also found in Ireland and Norway.
Of course, some weapons and tools have also been interpreted as toys; they are either miniatures or made of wood. Some example of real weapons of smaller size have been found in children graves in Iceland (small spearheads, axes or knives). It’s also totally possible that wooden swords have been used as training weapons as well, and that playing with a certain kind of toy might be used for more serious purposes.

It’s possible that Viking Age children were also playing with various stuff made of organic materials that were available around their living place, as well as miniature objects (like small clay pots). It’s also probable that they were playing with animal bones, as Icelandic children from the 20th century did, and this would be shown as unusual bones arrangements finds, that could have been as well interpreted as “ritual practices”… Well, there are often doubts when it comes to ritual finds. Everything is a matter of interpretation.

The board games are well known from archaeology; they have been found in graves, and we know that they were played as much at home as during expeditions thanks to the different places they’ve been found. Being good at board games was particularly important for nobles.
A well known example of Viking Age board game is the hnefatafl (no, it’s not a weird sneezing sound). The name comes from “hnefi” (the king) and can be translated at “the king’s table”. It was played everywhere in the Viking world, and it stayed quite alive for a long time despite the chess becoming more and more popular. Therefore, many hnefatafl boards have been found in archaeological contexts, some very well preserved despite being made of wood! If you want to play it, some rules are pretty easy to find on internet. For the lazy ones, this one (in English) is pretty clear. There are many ways to play it, with different starting positions, number of pieces, etc, so feel free to find the one that suits you best!

Board game pieces and dices are a common find, but rarely complete sets. They can be made of amber, bone, glass, wood or ivory. They are mostly find in aristocratic graves, and therefore can be understood as an expression of their high status. They are so common in those that they can be considered as part of the mandatory funerary equipment, probably as symbols of strategy skills and intelligence.

The Viking Age people were playing outdoor games, and we know about it thanks to the sagas* mentioning these. One of them, described several times in sagas, was called knattleikr and was played by both children and adults using a ball. The full rules are unknown, but playing it necessitated throwing, chasing and running at least, with a minimum of four players.
Another game, called sköfuleikr, was played during winter using horn scrapers. As the previous one, the rules are not explained clearly in the sagas, but it seemed to be quite violent as it could result in the death of some players.
There was also a kind of wrestling, called glima. According to various sagas, this could also possibly end in someone’s death. Pretty metal.
(Glima is still a thing nowadays, but it very rarely results in people dying. Here is a video of people practising it in a beautiful location).
And, when tired of having men fighting against each other, the Viking Age people organised horse fights; the fight would go on until one of the horses was defeated or ran away.

Some other kinds of sport, a bit more different, were swimming and… Drowning competitions. Simple rules there: keep your opponent under the water as long as possible. Surprisingly, I don’t find any mention of death for this one… Of course, just bathing calmly was also appreciated.
Skiing and ice skating were also part of the fun activities, even if they were used for practical reasons as well. The oldest skis found in Scandinavia are dated from 3300 BCE, and Ullr and Skadi, a Norse gods and a Norse goddess, are even both associated with skiing! The Viking Age ice skates were made of bones, and have been found in high quantity in Sweden. Unlike today’s skates, those were not sharp and a long stick was used to push and go forward.

In the sagas and other written sources from the Viking Age, many various musical instruments are mentioned. In archaeological contexts, some were found, as bone flutes, blowing horns and blowing pipes. Bells and rattles have been found in graves, and it’s possible that some other instruments were made of animal bones. Music was played during special occasions, as well as in everyday life. Dancing, poetry and other kinds of dramatic performances are also known, and of course carving, sculpting and everything related to decorating objects were considered a quality pastime as well.

And last but not least… Drinking games. I had no idea in which category those would stand, so let’s consider them art. The goal was generally to drink a lot without passing out (basically all you had to do is pretending to be fine while being drunk), and they were played in teams. During those, Viking Age people would tell rhymes and insults their opponents. Later on, they would end up singing and telling stories, or gambling.

I hope you’ve learned a thing or two with this article! There is much more to say about Viking Age pastimes, and I deeply encourage you to go through the sources below (and to check their bibliography) if you are interested in this topic. Now, feel free to leave a comment under the article, share it, or just go playing games (without killing real life people if possible). 😀

* Sagas are medieval texts telling ancient Nordic and Germanic stories, and there are so many of them they deserve an article of their own.

I, of course, used a non-exhaustive list of sources depending of what I could access and apologize in advance if it is missing important information. This article will possibly get edited if necessary. This article is NOT a scientific paper and only has a popularisation purpose – I encourage readers to go further in the research if they have an interest in this topic!
English is not my first language so there are some mistakes, obviously. Don’t hesitate to tell me about the ones you find in the comments, I’ll gladly correct them!
The pictures, except the runestone one, are the property of the History Museum of Stockholm.

One Reply to “Vikings just wanna have fun”