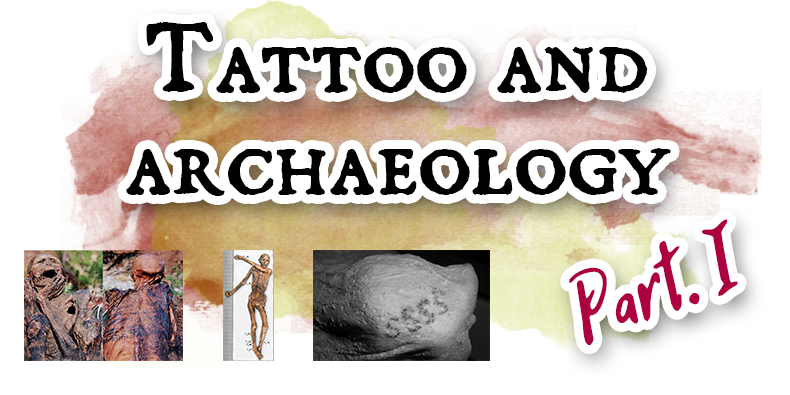 Nowadays, getting a tattoo is a fairly mainstream thing. But tattooing is a veeeery old art… What tools were used then? What were the symbols of a tattoo for various civilizations? And who were the tattoo artists? Since one article is definitely not enough to deal with this complex topic, I’ll write about it with each time a more in-depth article on a specific point. As a starter, a little overview of the oldest tattoos in the world….

The oldest tattooed man in the world: Ötzi

Tattoos are probably as old as humanity. But to this day, the oldest tattoos found on a human being are on the so-called Ötzi, and date back more than 5000 years, between 3370 and 3100 BC! Discovered in the Ötzal Alps – hence his name – on the border between Italy and Austria in 1991, Ötzi got naturally mummified by the cold. His clothes, accessories and tools have also been preserved, and all this data has made it possible to build hypotheses on the causes of his death, but has also given us many indications about his life and his environment. Ötzi’s body has 61 tattoos, all lines, scattered in small groups between his left wrist, legs, ankles and lower back. The ink is made from soot, and it is possible that the tattoos have been made for therapeutic purposes, since he had so many health problems.

The oldest tattooed woman in the world: the Gebelein woman

The Gebelein woman, a mummy discovered on the site of… Gebelein (what a surprise), in Egypt, got recently re-examined after being on display at the British Museum for decades. From this examination results the discovery of tattoos, and the mummy being almost contemporary of Ötzi, she is also part of the very private club of the oldest tattoos in the world!
Indeed, the Gebelein woman, as well as her male sidekick discovered on the same site bearing the sweet name of “Gebelein man A”, are dated between 3349 and 3093 BC. This corresponds to the Predynastic period in Egypt, just before the reign of Narmer, considered as the first pharaoh of the first Egyptian dynasty. I’m not going to dwell on ancient Egypt because it’s far from being my area of expertise, but basically these mummies are quite old.

The Gebelein woman shows four “S” patterns on her right shoulder, as well as a curved line on her right arm. The latter resembles artefacts whose representation can be seen on ceramics of the same period, corresponding to ritual activities (types of sticks used during dances). It is also possible that it represents a hook-shaped sceptre, a symbol of power and high status.
Concerning the “S” on the shoulder, it is a pattern that can be found on Predynastic pottery. If these interpretations are correct, the Gebelein woman would have the oldest figurative tattoo in the world!

The oldest tattooed human beings in the world

The oldest tattoo in South America is found on a male mummy from the Chinchorro culture (between 7000 and 1100 BC), discovered in Chile on the site of El Morro. He, too, got naturally mummified, and was between 35 and 40 years old at the time of his death. He wears a dotted moustache as a tattoo, showing 8 dots on the left of his nose and 4 on the other side. He is dated between 2563 and 1972 BC.

For North America, it’s in Mexico. Dating back to 250 AD, the so-called Momia Tolteca (“the Toltec mummy”) is a woman found in a cave near Santa Maria Camotlan. She has tattoos on both arms, with zoomorphic and abstract motifs.

Concerning Asia, it’s in China, and more precisely in the Tarim basin, that the oldest tattooed mummies have been found… And yes, there are several, all dated between 1250 and 100 BC. The most famous one is a woman, dated between 1000 and 600 BC, who has charcoal and soot tattoos. Her tattoos were probably ornamental or symbolic. There are moons on her eyelids, oval shapes on her forehead and decorative motifs on her left hand, wrist and fingers. These patterns are similar to tattoos found on mummies in Russia, so they may correspond to a Eurasian tradition.

As the title shows, here are two other tattooed mummies I find particularly interesting.

Also known as the “Princess of Ukok”, this female mummy was discovered in Russia on the Ukok Plateau, at the top of the Altai Mountains near the borders between Russia and Mongolia, China and Kazakhstan. Dated between 400 and 200 BC (corresponding to the Pazyryk culture), her mummified body has been preserved by the Siberian permafrost. She was about 25 years old at the time of her death, and was buried with six horses, some food, and multiple objects.
Her tattoos are superbly sophisticated; for the Pazyryks, tattoos allowed members of the same family or culture to find each other more easily after death. They were also representative of a person’s age and status: the more tattoos a person had, the more important they had lived/were. The Siberian ice maiden has only two tattooed arms, with representations of mythological animals and hybrids (Griffon/capricorn, panther…), from shoulders to hands.

Apo Anno is a male mummy found in the Benguet province, Philippines. He is dated between 1100 and 1300.
Apo Anno was a local hero, whose legend is still known to Filipinos and still makes the province’s inhabitants proud.

According to the legend, he was the son of a human and a spirit then in human form, called Kuyapon. Anno was raised by Tugtugaka, his father, and became an excellent hunter. He was the protector of his village, but he was a peaceful man who didn’t want to do wars. The villagers and the other tribes respected him greatly.
When he became old and felt that he was close to death, he asked to be buried in a place around Nabalikong. While the villagers protested that his coffin would be far too complicated to transport across the mountain, he told them that they will just have to let him float on the river, and the coffin would find its way. To the great surprise of the villagers, who had of course followed his instructions, this actually happened when Anno died.
Apo Anno’s body is covered with symbolic tattoos showing his important status.

Since May 1999, the mummy of Apo Anno has not been shown to the public, after many trips and exhibitions between the United States and Manila. The original coffin was lost (but a new one was made so that Anno could finally rest in peace!).

Here is the end of the first article about tattoos! As in the previous article, the sources I used can be found just below, if you want to learn a little more 🙂 Feel free to express yourselves in the comments, and see you soon for another trip back in time!

I, of course, used a non-exhaustive list of sources depending of what I could access and apologize in advance if it is missing important information. This article will possibly get edited if necessary. This article is NOT a scientific paper and only has a popularisation purpose – I encourage readers to go further in the research if they have an interest in this topic!
English is not my first language so there might be some mistakes. Don’t hesitate to tell me about the ones you find in the comments, I’ll gladly correct them!